Traumatic Brain Injuries – Visual and other Symptoms and Care

Facts you should know about Traumatic Brain Injuries (TBI)

Traumatic Brain Injuries (TBI) affect more than 2 million Americans each year, and possibly closer to 4 million. The Centers for Disease Control (CDC) estimates include 50,000 deaths, close to 300,000 hospitalizations, and over 1,300,000 emergency department visits. At least as many more injuries are seen in primary care offices or not at all, and not officially reported. Fortunately, for the vast majority, the injury is a concussion, or mild TBI (mTBI), and recovery occurs over the following weeks with few persistent symptoms. However, for 10 to 20% of those with mTBI, symptoms will persist, sometimes for months to years. A range of behaviors are typically affected including cognition, emotion, visual and vestibular function, and sleep, with headaches being an almost universal complaint.

Sporting injuries may be the largest contributor, but falls, motor vehicle accidents (MVA), assaults, and a wider than one would think variety of “head bumps”, are also relatively common. Different causes are more likely at different ages, with falls predominating at younger and older ages, sports for those in their teens and twenties, and MVA during the rest of adulthood (although it is the most frequent cause of TBI related death for those 20-24).

Regardless of cause, TBI results when the brain is rattled inside the skull and is subject to compressive and/or shearing forces. These forces lead to tissue damage and a cascade of physiological responses with both immediate and longer term consequences. mTBIs can occur with or without a loss of consciousness (LOC). Being by definition, mild, if a concussion does lead to a loss of consciousness, it is most often a few minutes or less. However, a sensation of being dazed, and a loss of memory around the time of the event is very common, with or without LOC.

One of the great dangers of sports concussions is the possibility of a second impact when the brain is still in a compromised state. Even minor second impacts that would normally be brushed off without consequence, can trigger significant symptoms, or create symptoms that weren’t present after the first. This is particularly problematic in sports, where the player, coach and team all want back in the game. Not only can a minor jar lead to outsized injury, but slowed reflexes make it much more likely.

As a variety of behavioral functions are impacted by TBIs, optimal treatment requires an interdisciplinary team approach, which may include the Primary Care Physician, neurologist, optometrist, psychologist, physiatrist (physical medicine and rehabilitation), and physical, vestibular, occupational, speech and/or visual therapists. The sooner care is sought and delivered, the better the outcome is likely to be.

Current thinking is changing regarding the timing of therapy. Where complete rest until most symptoms subside has been recommended in the past, there is now a move toward more active rehabilitation. For mTBI, rest is advised for 24 – 72 hours. Following that period, under professional guidance, a structured and monitored return to physical activity may be most beneficial. Behaviors with much risk of head impact should be avoided, but may include activities involving aerobics, eye-body coordination, strength, etc…

Initial effort should be reduced below maximum tolerated, and frequent breaks should be taken. This is also true for visual activities. Although there may be the desire to jump back into things, if you push yourself too hard, symptoms will be exacerbated, and optimal recovery delayed.

In general, we recommend what’s called the 20/20/20 rule when participating in extended near visual activities – every 20 minutes, take a 20 second break, and look 20 feet away. This reduces eye strain, blurred vision and dryness by preventing very long periods of locked focus and the decreased blinking that goes along with it. When you shift focus, the eyes relax, and you automatically blink more.

Following a TBI, however, I encourage a 5/20/20 rule – until visual work can be done with minimal symptoms, take even more frequent, but still quite short, breaks before there is interference with performance. This can keep one working for longer periods, with greater efficiency and comfort.

Specific therapy to address areas of difficulty leads to enhanced recovery, compared to just “time” or self-directed activity. Depending on individual circumstances, this may include the services of one or more of the specialists listed above, to improve balance functions, visual functions, strength and coordination, cognitive, emotional and sleep issues, etc…

Nutrition is a factor that is well recognized, but all too often receives less attention than it deserves. This is true for general health, as an adjunct for various disease treatments, and in concussion care. Maybe it’s because it’s simple, but not easy. No drugs, no tremendous expense, no complex or exhausting regimen…. But eating ‘well’ takes time, knowledge, and self-control – things many humans are not especially good at. We’re in early stages of learning what optimal nutrition really means. However, in regard to concussion care, two relatively simple – and easy – actions may be very helpful.

Omega 3 Fatty Acids – Especially as found in fish oil – The body cannot make these products. They must be consumed directly or converted from precursor compounds. They have generally anti-inflammatory effects, and are a key building block for brain tissue, comprising about 1/3 of the brain by weight. Research suggests enhanced consumption of Omega 3s may speed recovery after TBI, and may help protect the brain from TBI beforehand. As a ‘supplement’, they are minimally regulated, so it is important to be knowledgeable about specific products and manufacturers. We recommend Nordic Naturals. Please contact us for more info and a special discount access code.

Good hydration - Adequate fluid intake may relieve some of the headache symptoms frequently seen after concussion. Whether it’s the TBI itself, or the likelihood of eating and drinking less when not feeling well, and becoming dehydrated, drinking an extra ½ gallon of water over the course of the day is a low cost, low risk treatment to try out for a week or so after a concussion has been sustained.

Treatment of Post-Concussion Syndrome (PCS) may also involve counseling and/or medications, particularly to address the cognitive, emotional and sleep disturbances which are commonly present. The neurologist and psychologist are most likely to have the greatest say in these regards.

When a concussion occurs, it is not always immediately obvious. There is often a lot of adrenaline flowing after any injury, so a little confusion may be present with or without concussion, and head pain or other symptoms (which may appear later) may not be acknowledged right away. This is particularly true in sports where athletes are taught to be tough, to ‘take one for the team’, and to want to get back in the game. To determine if a concussion is likely, and take steps accordingly, certain behavioral signs can be examined. Visually, eye-movements provide a good diagnostic measure. Although eye-movement tests can suggest if a problem exists, they are most useful if baseline data for the individual is available. It’s not practical or efficient to gather this for most people, but if at higher risk, such as participants in organized football, soccer and hockey teams, pre-season screenings can be beneficial in determining if a player should be removed from a game, and when s/he has recovered sufficiently to return to play.

Thanks to recent medical understanding and exposure in the popular media, there is a much greater appreciation and awareness of TBIs than there was even 5 years ago. The more we learn, the more we realize how prevalent mTBIs are, and how they can have serious, long term consequences. Getting “knocked-out” really isn’t a harmless as it looked on Bonanza or Mannix (OK, I know that dates me), where they’d get up, rub their chin, shake their head a little, and then be on their way. TBIs, even mild ones, need to be taken seriously and treated appropriately by professionals with the proper knowledge. Professionals and the public need to know what to look for and what to do. Hopefully, these few pages are a step in that direction.

From one of our TBI patients:

I want to thank you for taking such special interest in my daughter (s/p Concussion) January 2018. I am happy to report all signs and symptoms are gone and she has returned to normal.

Your quality of care is phenomenal and I will refer all my friends your way! 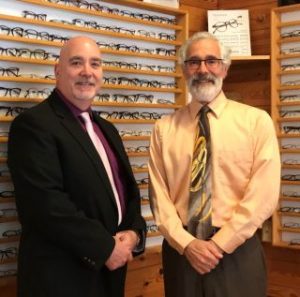