1. What is Myopia? What is the progression?

Myopia, otherwise known as nearsightedness, is when you can see things clearly (more or less) up close, but fuzzy far away. It occurs when the eye is “too long”, so light coming into the eye focuses before it gets to the back of the eye. Usually, when someone starts becoming nearsighted, it continues to get worse over the next number of years. The earlier myopia starts, the more likely it is to progress for a longer time and result in a higher final amount. For many children, it begins during the early school years (very often between 7 and 9 years old) and usually will stop by the late teens to early twenties.

2. Why is the progression of Myopia a health concern?

Myopia is recognized as much more than an inconvenience. Any level of nearsightedness presents a greater risk for eye diseases in later life. These conditions include glaucoma, cataract, myopic macular degeneration, and retinal tears, holes, and detachments. Most of this is because as the eye gets longer the neural, light-sensitive tissue on the back of the eye, the retina, becomes thinner and more prone to damage. The risk of these conditions increases dramatically when myopia is greater than 5 units (known as Diopters)

3. At what age should you start controlling the progression of Myopia?

The earlier myopia control begins, the more likely we’ll be able to reduce the final amount. We typically wait until we see progression occurring from one exam to the next. Other factors, including family history, electronic device use, and lack of outdoor time also influence our recommendation.

4. What is Ortho K/Contact Lenses and how does it control Myopia?

Ortho-K (orthokeratology – also known as Gentle Vision Shaping System (GVSS) and Corneal Reshaping Therapy (CRT), among other names) is a treatment involving the use of customized rigid molds (similar to contact lenses) which are worn while sleeping. They modify the shape of the front of the eyes. This allows clear daytime vision without the use of glasses or contact lenses, which is pretty neat itself. What’s really exciting, however, is that by temporarily changing the shape of the eye, it changes how light is focused within the eye, which changes signals to the eye, telling it not to grow as much and slowing myopia progression!!

Certain kinds of soft lenses, which need to be worn throughout the day, can also alter the way light focuses and can also slow the progression of myopia. Depending on prescription and the child’s personal characteristics, these may be recommended rather than Ortho-K. If handling of lenses is not possible for one reason or another, a nightly eye drop, Atropine (in as low a dose as possible), is another alternative.

5. What lifestyle changes can be made to lower the progression of Myopia?

A significant body of research indicates that the more time a child spends outdoors before becoming myopic, the more likely myopia will be delayed. The exact reasons for this are still uncertain, but the evidence is convincing. Some classrooms in Asia (where myopia can reach over 75% of teens) now have glass walls to increase natural light. Two hours or more per day of outdoor time is recommended for maximal benefit. More time outdoors also translates to less time on phones, pads and other devices. It’s interesting that the worldwide increase in myopia is occurring just as device use and social media have exploded!! These new technologies are unavoidable, provide great benefits, and are part of our lives. However, they present as many challenges as opportunities. That’s a discussion very much worth having, but beyond this Q&A. For a great look at this issue and the impact on social as well as visual myopia, check out “A Parent’s Guide to Raising Healthy Children with Healthy Vision”.

6. I have heard that Myopia is being called an epidemic. Do you think so? And if so why is the prevalence increasing so dramatically?

The prevalence of myopia has increased dramatically over the past fifty years, and even more quickly over the past twenty. In the US, about 25% of teens through 50 year olds were nearsighted in the early 1970s. By the early 2000’s this figure was about 40%, demonstrating a 60% increase. In Seoul, South Korea, over 90% of 19 year olds are now myopic. Worldwide, myopia affects about 23% today, and is projected to affect 50% of the earth’s population by 2050. I’m not an epidemiologist, but those numbers are pretty startling to me.

We used to think that genes were primarily responsible for nearsightedness. They certainly play a role. Having one nearsighted parent increases the odds of a child being nearsighted by 3 fold. If both parents are myopic, the risk is 6 times greater. However, lack of outdoor time, long periods of intense close work, and other environmental factors such as diet, seem to be as or more important. Large scale migration from rural to urban environments (for example in China over the past generation) is associated with greater numbers of myopic children, strongly implicating non-genetic factors. 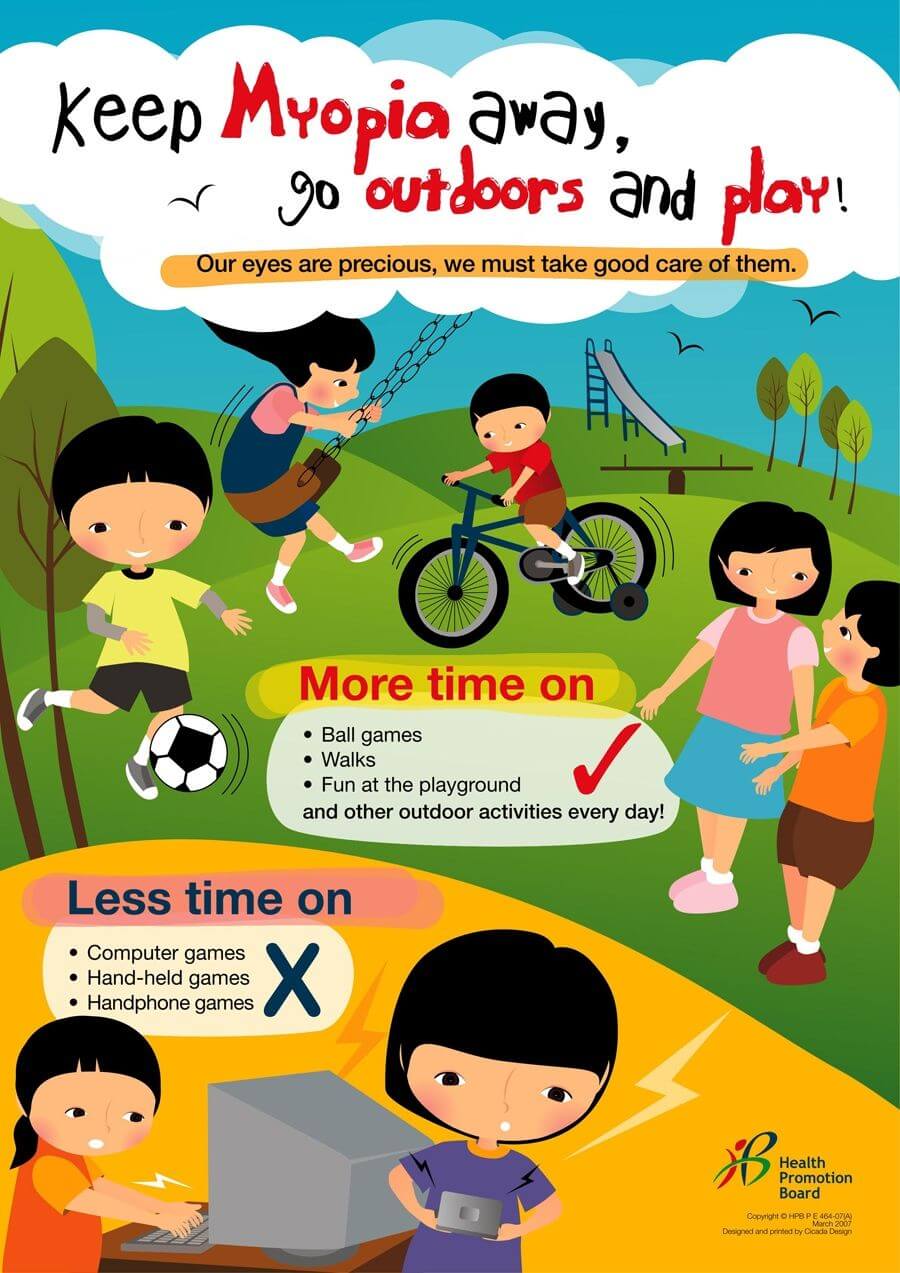